Over the last few years there has been a resurgence in ladies’ football, with the England Lionesses qualifying five times for the FIFA Women’s World Cup, reaching the quarter finals on three of those occasions; as well as reaching the final of the UEFA Women’s Championship on two occasions; and winning the 2019 SheBelieves Cup. Players such as Lucy Bronze, Steph Houghton and Jill Scott are now household names.

Ladies football at AFC Portchester has had a similar resurgence, and now a team of qualified and experienced coaches are dedicated to the development of girl’s football, starting from under 10’s and going through to the ladies first team (over 18).

All of our coaches are DBS CRB vetted and every team has at least one FA Level 1 qualified coach. We are always looking to add to our roster of players, especially at the teenage years, and our current teams and respective coaches are: 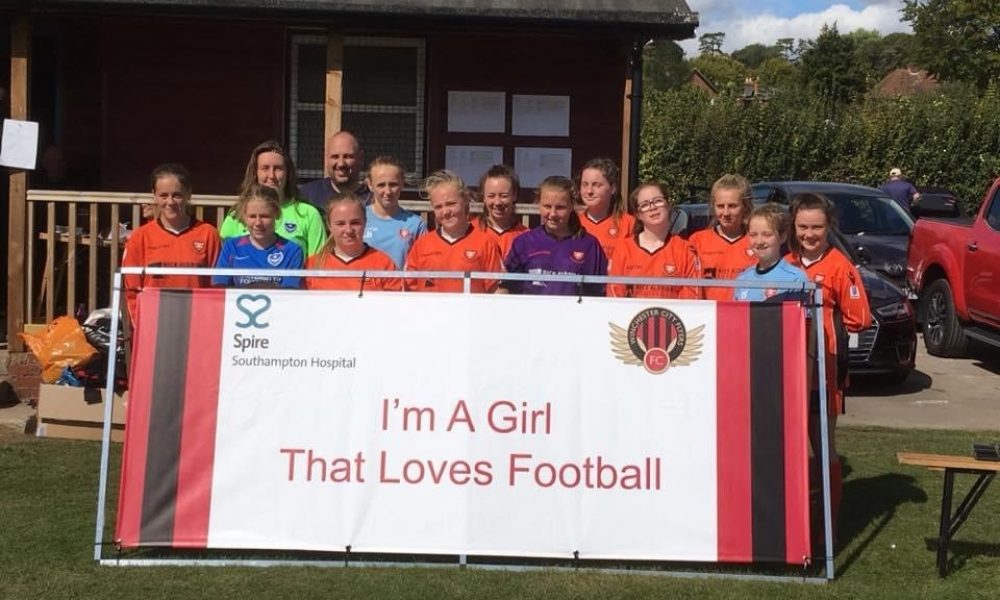 Meet some of the players and coaches:

The AFC Portchester U10 Girls Castles play in the Hampshire Girls Youth Football League in the U10 County 2 Division.

They are managed by Darren, and assisted by Mark and Rob.

Some of the girls have been with the club from the age of 4, and they have all formed very close friendships over the years!

They started at Under 8s, competing in the Portsmouth Youth Football League, playing against boys every week. After some very tough results initially, the girls kept training hard and learning, with their results and performances improving dramatically over the course of the season.

The following season they moved to Saturdays to compete in the Hampshire Girls League. They had a great season, reaching the Hampshire Plate Final, which was a fantastic experience for them all.

Darren coaches the under 10 girls’ team, and has the FA Level 1 coaching qualification, as well as First Aid and Safeguarding.

He has been coaching for nearly 10 years, starting with the AFC Portchester U8 boys, which he took through to U15s.

He is also manager of our mens Veterans team. 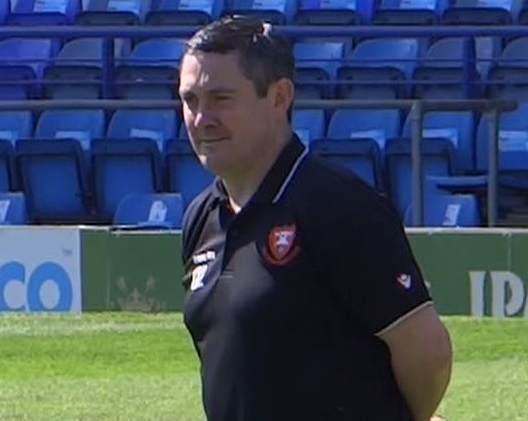 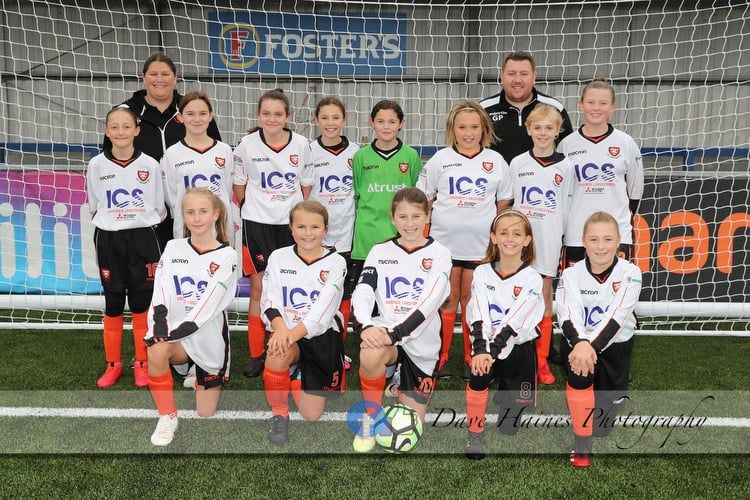 AFC Portchester U12 Girls Castles have been part of the club for four years. They play in the Hampshire Girls Youth League, in the U12 County 2 Division.

Managed by Sarah and assisted by Gary (pictured), the squad are a friendly group, who are always willing to try their best for each other. They concentrate on playing with a slick passing style and defending from the front. All members of the team follow three key rules:

Over the past few seasons, they have grown and grown in confidence and ability, and this has seen them reach the Semi Finals of the League’s Plate competition for the past two years, losing to the eventual winners on both occasions.

They have also seen success in tournaments and are the current holders of the AFC Portchester 6-a-side title for their age group!

All coaches within the team are fully qualified with the FA. They hold the FA Level 1 Coaching Award, FA Safeguarding Children and Emergency Aid qualifications. In addition, all coaches have the FA DBS check completed. 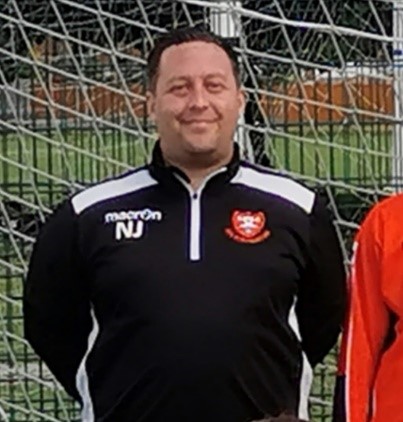 Nathan is the coach for the U12 Saxons girls team. He is a Level 1 qualified coach and is also qualified in safeguarding and first aid. He has been involved in coaching both youth and adult football for 10 years, and has previously coached at Swood FC, Widbrook FC, Barewood Panthers FC, Athletico Porto XI charity squad. He has also been involved in community development with Havant And Waterlooville FC. He has been coaching at AFC Portchester for four years, where he is assisted by Sonny, who is Level 1 qualified coach, who has been coaching for two years.

Sonny focuses on helping the girls to develop their fitness, technique, ability and mental awareness, which enables the girls to progress competitively. Sonny’s daughter plays for the team and loves the fun that she and the rest of the girls have, whilst they are learning and improving. 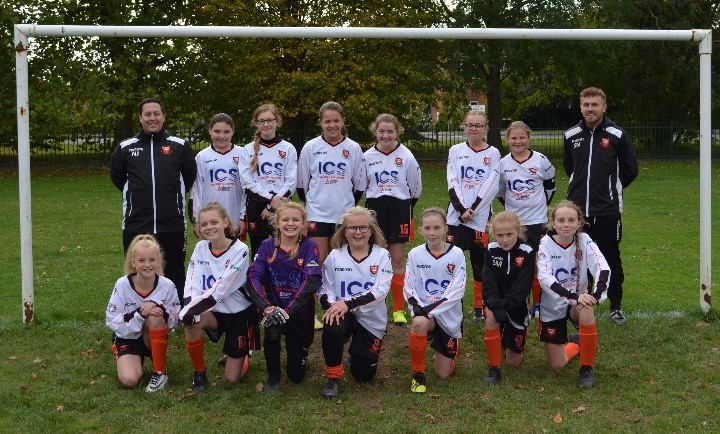 Managing and coaching the under 12 Saxons has been a great experience so far. We have taken a group of girls who had either little or no football experience, working very closely as a combined under 12 age group we have seen huge development in our team, who in their first season have won their first competitive games in the HGYFL, and are building a very strong team bond. 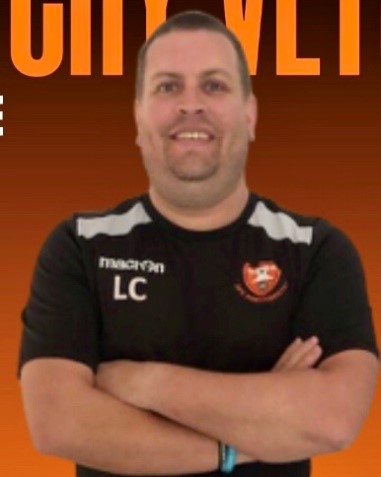 Lee is the coach of the under 13 girls’ team, and the U13 league representative team coach. As well as holding qualifications in First Aid and Safeguarding, he also holds the FA Level 1 qualification in football coaching. Lee has been coaching for over 10 years, having coached at Horndean Hawks, Middleton Diamonds, and Chichester City Colts; and has a wealth of experience across all age groups from mini soccer through to Under 16s. He has coached teams in the PYFL, MSYFL, Arun and Chichester League and also the HGYFL, as well being the current coach of the HGYFL under 13 representative side. Lee now coaches our under 13 girls team and has been with the team since the outset when they were formed at under 9s, he is assisted by Scott.

They currently compete in the top division of the Hampshire Girls Youth League and over the past 5 seasons have won numerous cups and tournaments. Most recently (2019/20) they reached the semi-finals of both the league and county cups, whilst also finishing third in the league behind Portsmouth and Bournemouth.

The team ethos is based on the girls enjoying themselves and playing with a smile whilst also striving to be the best they can be and competing at the top of their age group. There is a real focus on player development, both as individuals and as part of the team; players are developed with a longer term aim to see them play in the ladies first team. 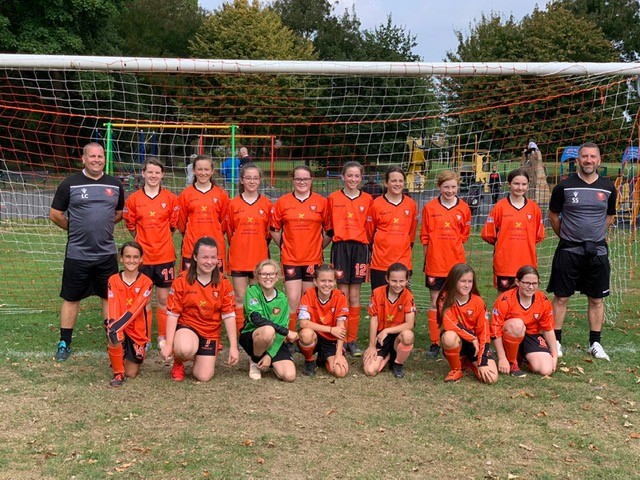 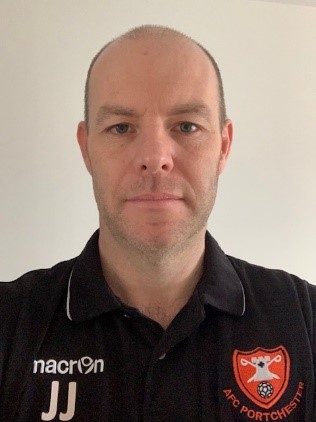 The under 15 girls are coached by Jim, assisted by James (pictured). They are both FA level 1 qualified coaches, with qualifications in safeguarding and first aid.

As with all teams at AFC Portchester the focus is on the girls working together as a team, having fun, and helping each other to be the best they can be. The U15 are pictured here in the final of Hampshire Cup where they narrowly lost to AFC Bournemouth. The girls also take part in the beach soccer tournament held on the Isle of Wight each summer, where the focus is on fun in the sun! 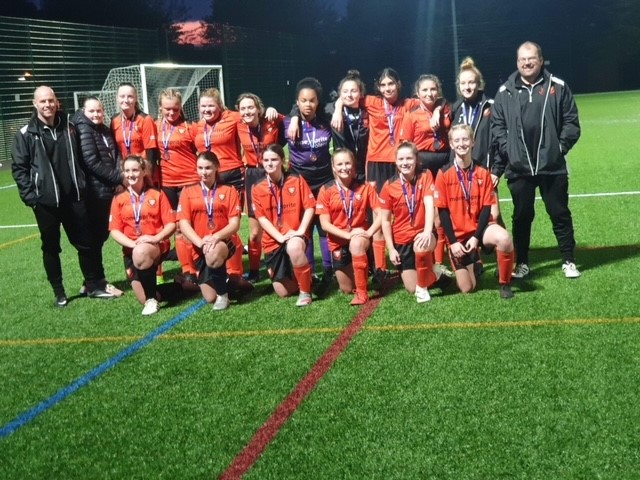 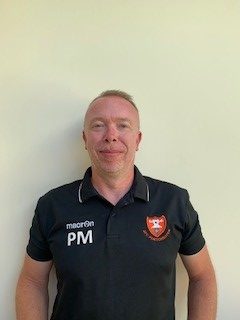 Paul is the coach for the Under 17 girls team, who will move up to be the U18’s team next season. As well as safeguarding and first aid, Paul is also a FA Level 1 qualified coach for adult and youth football, and the deputy phase lead for the development of girl’s football at the club. Having spent a season as assistant coach to Mark Dugan, this is Paul’s first season as the lead coach. With two daughters playing football, Paul has a genuine commitment to furthering girl’s football. Paul is assisted by Brad, but parents/carers also help set up the pitch for match days and fill some of the roles, such as assistant referee and ‘respect’ steward.

The team’s focus is on the players having fun and making friends; and supporting each other as a team to challenge themselves to be the best they can be, both on and off the pitch. The aim is to equip players with valuable life skills as well as football skills, and develop the next generation of Ladies First Team players. Some of the girls also now play for the Ladies First Team.

Here’s what a few of the U17 team have to say about why they play football: 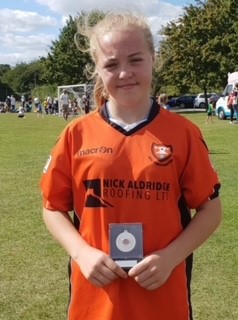 Harlie has been playing for AFC Portchester for three seasons. Her favourite role is on the right wing, where she uses speed and skill to create goal scoring opportunities for herself and others. She has been the Golden Boot top scorer for two seasons and was awarded Player’s Player by her team mates.

“I started playing football because I love the game. Playing has improved my fitness and self-esteem. I have made some fantastic friends with my team-mates. We are a football family”.

Bella has been playing for five seasons and as well as playing for the U17 team she is now a regular starter for the Ladies First Team. She can play equally well up front as a striker, or at the back as CB or LB. Bella has taken part in a number of successful tournaments, but her favourite was winning the regional ESF tournament and getting to compete in the national finals at St Georges Park. Her commitment and ability have been recognised with individual awards, including Coaches Player and Managers Player.

“I have a passion for playing football, it has allowed me to develop good friendships, build my self-confidence, and be part of a great team. The coaches are very supportive and caring, and help us to push ourselves”. 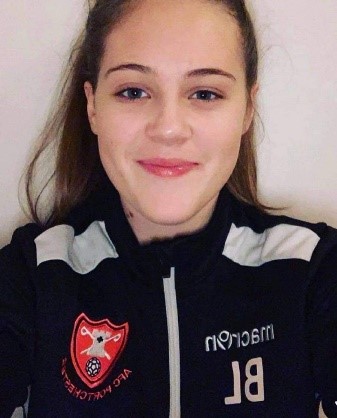 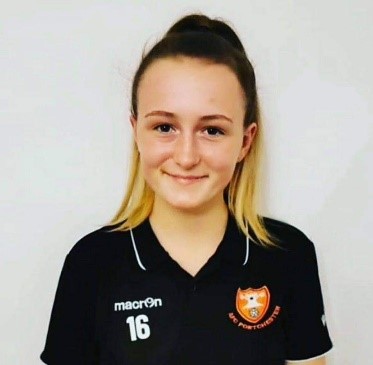 Ella has been playing for AFC Portchester for three seasons. As well as playing for the U17’s side, she also debuted for the Ladies First Team this season and is now a regular in the side. Ella’s favourite position is the Number 10 (attacking midfielder) and she is a regular goal maker and scorer, previously being top goal scorer, as well as Players Player and Manager’s Player.

“My favourite football moment was playing in the national finals at St George’s Park. But what I enjoy most is playing football with my friends”.